When I was a kid growing up on our dairy farm in Wisconsin 40 years ago, marble cake was one of my mother’s specialties. I was always fascinated with the way that the marble seemed to appear in the cake “by magic.”

I have noticed over the years that there are two philosophies for Strawberry Shortcake. There are the people who make Strawberry Shortcake with biscuits. And then there are those who make it with angel food cake or plain white or yellow cake. My mother belonged to the biscuit philosophy. She also made baking powdered biscuits when she ran out of bread and needed a quick bread to serve with a meal.

My mom and dad both considered baking powder biscuits spread with butter and drizzled with pancake syrup or dark corn syrup to be an extra-special treat.

I made this punch for the open house that we had at the newspaper in June (2010) for the All-School Reunion 100th Anniversary for our high school.

These breadsticks are easy and go well with spaghetti or soup. You can make breakfast treats with them using cinnamon and sugar.

Not only is this a rich, dark bread that makes terrific sandwiches and tasty toast, it’s also high in fiber and low in refined sugar.

These muffins are quick and easy to make for breakfast. I also make them for the coffee that’s served after church on Sunday, too. The church is the same little white country church I attended as a child. 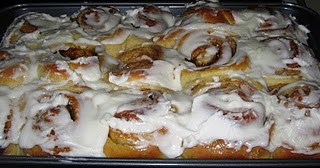 How to Make an Easter Bunny Cake

When I was a kid, my mother would talk about eating hot cross buns at Easter when she was a child. The buns were something that her mother made every year.

This recipe is perfect for small fillets such as Bluegill or other sunfish. You will need 3 to 4 cups of fish (a quart freezer bag).

Here’s a quick little video showing you how easy it is to make hard boiled deviled eggs in an Instant Pot.

My mother used to bake bread about once a week when I was growing up on our farm. Store-bought bread, she said, was “too fluffy” and “doesn’t taste like anything.” Here’s the recipe for my mother’s bread.