When I was a kid growing up on our small dairy farm in Wisconsin that had been homesteaded by Norwegian immigrants in the late 1800s, I figured everyone knew how to make lefse. After all, everyone I knew could make lefse, so didn’t that mean everyone else could make it too?

That was forty years ago.

In the rural area where I live, however, at least a few people still do know how to make lefse. And at Christmas, you can even buy lefse in some of the grocery stores around here.

Several years ago, a girl from Norway was a foreign exchange student at the local high school. When she found out some people in Wisconsin still make lefse and that we consider it a delicious delicacy, she expressed amazement. “I can’t believe you make that yet. We don’t do it anymore in Norway,” she said.

‘What?’ I thought. ‘No lefse?! What’s the matter with those Norwegians?’

During the latter part of the 1800s, 30,000 Norwegians immigrated to Wisconsin. Today, nearly a half million people are their descendants out of a total population of 5.5 million. In other words, almost 10 percent of Wisconsin residents are of Norwegian descent.

Expert lefse makers use a lefse griddle (a large, round electric griddle that heats up to 500 degrees), a grooved lefse rolling pin, and flat wooden lefse turners. But you don’t have to buy special equipment to make lefse. You can use ordinary kitchen utensils: an electric fry pan (that heats up to 400 or 450 degrees Fahrenheit), a rolling pin, a pancake turner, and a large mixing bowl. You will also need potatoes, butter or margarine, a little sugar, some milk, and flour.

Rolling lefse is a skill that requires plenty of patience and lots of practice. Expert lefse makers produce pieces that are as large as the top of a snare drum and practically thin enough to read a newspaper through. My lefse, which turns out just like my mother’s did, is about the size of a dinner plate and somewhat thicker.

Lefse experts recommend ricing the cooked potatoes, but my mother always mashed the potatoes. Refrigerating the mashed or riced potatoes overnight makes the lefse easier to roll out.

When you’re ready to start making lefse, take the potatoes out of the refrigerator and mash or rice them again. I have one of those crisscross patterned potato mashers, and it works well for taking the lumps out of the mashed potatoes. Lefse rolls out easier if the dough is cold, so make sure the potatoes are cold when you start. You may also want to refrigerate the dough for a while after you mix it. I have noticed that when I reach the end of the batch and the dough is starting to warm up, the lefse is harder to roll out.

Making a batch of lefse from this recipe takes about one and a half hours and will yield approximately two dozen pieces, depending upon how much dough you use for each one.

Here’s my mother’s lefse recipe from the book Christmas In Dairyland.

Measure out the mashed/riced potatoes into a large mixing bowl. In a medium-sized saucepan, melt the butter/margarine in the milk; stir in the sugar and salt. Then pour over the cold mashed (riced) potatoes and mix.

Stir two cups of flour into the potato mixture. The dough will be sticky and soft.

Start heating the griddle or electric frying pan. Do not add any oil, margarine or shortening. Lefse is baked on a dry surface.

Starting in the center, roll outward until the lefse is about the size of a dinner plate. Try not to roll the lefse so thin that you cannot pick it up. If the lefse tears when you start to pick it up, gather it into a lump and roll it out again. Don’t do this too many times, though, or your lefse will end up tough and dry. Ideally, you should only roll the lefse once, although that’s probably not a realistic expectation if you’ve never made lefse before. Also try to turn the lefse only once while you are rolling it out. If the lefse starts to stick, add a little more flour.

When you have the lefse rolled out, transfer it to the hot griddle. Carefully pick it up and quickly move it. If you move slowly, the lefse is more likely to tear. Expert lefse makers use flat lefse turners (they look like long flat sticks) to transfer the dough by rolling it onto the turner and then unrolling it onto the griddle. You can also try rolling your lefse onto the rolling pin and transferring it to the griddle or the fry pan. 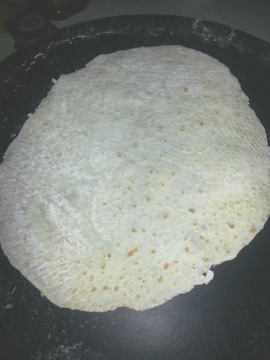 After the first piece of lefse is done, use the pancake turner to remove it from the griddle and place it on a clean dishtowel. Cover with another dishtowel.

Bake the second lefse and roll out the third piece.

When the second lefse is finished, place it on top of the first one and cover with the towel again.

Then bake the third piece.

Repeat until you have baked all of the dough. Place each newly baked lefse on top of the previously baked lefse and cover the stack with the towel. 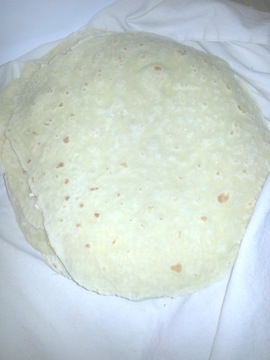 When you’re ready to eat a piece of lefse, spread it with butter (or margarine), sprinkle sugar on it (some people also like to sprinkle cinnamon on their lefse), and roll into a log.

Also, once the lefse is cool, it can be frozen.